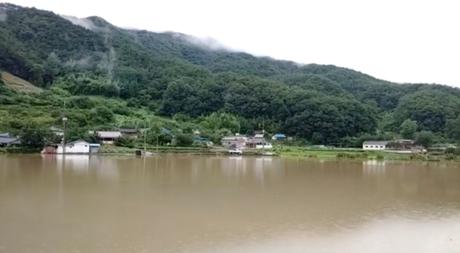 SEOUL At least 26 people have died after 46 days of heavy rains in South Korea, with the country's longest monsoon in seven years causing more flooding, landslides and evacuations on Saturday.

SEOUL A massive search was under way in South Korea on Thursday for five rescue workers swept over a dam when their boats overturned in surging floodwaters, while President Moon Jae-in raised concerns about North Korea releasing excess water without notification.

DHAKA (Thomson Reuters Foundation) - After losing his job at a garment factory in Dhaka in April as the coronavirus pandemic hit, Mohammad Sumon returned to his village in Jamalpur, about 160 kms away, hoping to support his family working as a part-time mechanic.

LONDON Failure to rein in climate change and bolster sea defences could jeopardize up to a fifth of the world's economic output by the end of the century, as flooding threatens coastal countries worldwide, according to a study released on Thursday.

SHANGHAI Chinese regions as far apart as Sichuan in the southwest and Gansu in the northwest are at heightened risk of natural disasters in the coming days amid another round of torrential rain, the country's weather bureau said on Thursday.

ANCHORAGE, Alaska A magnitude 7.8 earthquake struck near the Alaskan peninsula late Tuesday, shaking buildings, but there were no immediate reports of injuries and the U.S. National Tsunami Warning Center canceled an earlier warning of potentially hazardous waves.

GUWAHATI, India/KATHMANDU, Nepal Nearly four million people in India's northeastern state of Assam and neighbouring Nepal have been displaced by heavy flooding from monsoon rains, with dozens missing as deaths rose to at least 189, government officials said on Sunday.

A warning for "hazardous tsunami waves" was issued briefly for coastal regions within 300 kms (186.41 miles) of Wau in Papua New Guinea's northeast, after a 7.0 magnitude earthquake struck the region, the U.S. Pacific Tsunami Warning Center said.

WASHINGTON Campaign donations are flooding into the coffers of Democrats running for the U.S. Senate, but some Republican incumbents looking to protect their Senate majority hold a powerful cash advantage over their challengers as the election battle enters its final months.

SUZHOU, China Around one of China's biggest freshwater lakes, residents said they were confident they could fend off this year's floods, even as rainfall continues to break records. | Video